On December 24th, 2022 our much loved father, Robert Tweed Howser, Jr passed away peacefully and surrounded by his family in Murrells Inlet, SC. He was born March 23, 1931 to Robert T Howser Sr and Helen Adrian Howser of Ashburn Va. He lived in Loudoun County until 2020 when he moved to SC with his daughter Tammy.
He was husband to the late Edith Howser for 62 years, father to the late Debbie Howser Burgess, Connie Howser Stevens, Wendy Howser Jones (Bill) and Tammy Jo Howser Carpenter (Dan), and grandfather to Crystal, Trae, Stephanie, Brett, Tanner, Zac, and Nic, and great-grandfather to Maddie and Abby.
He spent his childhood in Ashburn on Janelia Farm with his sisters Jean and Jane where their father was the Farm Manager.  After graduating from Leesburg High School, he enlisted in the Navy and served as a Radioman/Operations Specialist on the USS Francis M Robinson DE-220 from 1948-1952. He loved Key West and formed many good memories that he often shared with us later in life. After returning home he began working for C&P telephone company. During his 30+ years there he worked his way from Lineman to Engineer. After retiring in 1985, he worked briefly for BCI Communications, Lansdowne Golf Club, and Brambleton Golf Course.
Shortly after his work life began, he married Edith Shuff Howser. Over the next several years they welcomed daughters Debbie, Connie, Wendy and Tammy. He quickly became a member of the “Girl Dad” club. Life became busy with all things daughter related. He and Mom rarely missed an event that we were involved with. Dance lessons, batton twirling, gymnastics, music concerts, cheerleading, softball, and basketball to name a few. His most admirable quality may be the fact that he survived living in a house with five woman and only one bathroom for many years. Not to mention the number of telephone calls received and boys that came knocking on our door.
They moved to Leesburg in the late 90’s after they had both retired, and quickly became the adopted Grandparents on Bellview Court. They had the absolute best neighbors you could ask for and they all looked after them until Dad moved in 2020. He loved sitting on the deck and feeding the many squirrels that he fondly referred to as “the boys”.  Those “boys” were the best fed squirrels in Leesburg.
His loves and interests outside of work and family included playing golf as often as possible, and he was a member of Loudoun Golf and Country Club for several years. He joined the Ashburn Presbyterian Church in 1943 and served as the Sunday School Superintendent, Deacon and Elder. He was a Lifetime Member of the Ashburn Fire Department where he was a past Chief and President.
He and Mom loved to cruise and play the slot machines in the Casino. They also enjoyed the occasional trip to Hollywood Casino in Charles Town. He also was a big DC sports fan, cheering for the Redskins (Commanders), the Nationals, and the Capitals. A highlight for him was attending the Super Bowl in 1984 with his sisters to see the Redskins play.
Dad lived a somewhat pampered and “spoiled” life, being surrounded by women for all of his 91 years. This began with his mother, then our mother, then the three of us after her. Tammy took over as care giver in 2020, and she and Dan provided him with a comfortable, safe, loving home in his final years. He did love the warmer weather in SC, but always missed Loudoun County and his friends and neighbors there.
He lived a good, long life full of family and friends. He’s now reunited with his wife, daughter, parents, and many other loved ones. The pain he felt here in this life has disappeared. He is free to fly high. He’s forever in our hearts. We will miss you terribly, Dad.  Go play golf Dad.  Mom won’t mind as long as you take her to the casino.
A service will be held in Virginia at a later date.
Station 6 has been drapped in black bunting in honor of Past. Chief and President Howser. 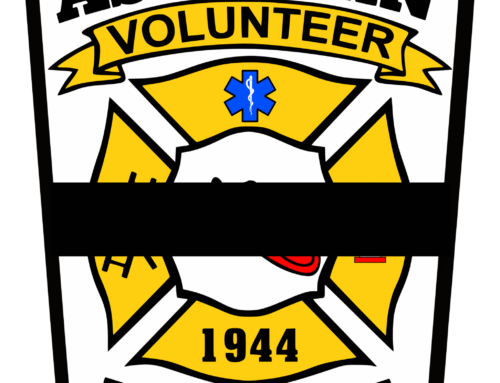